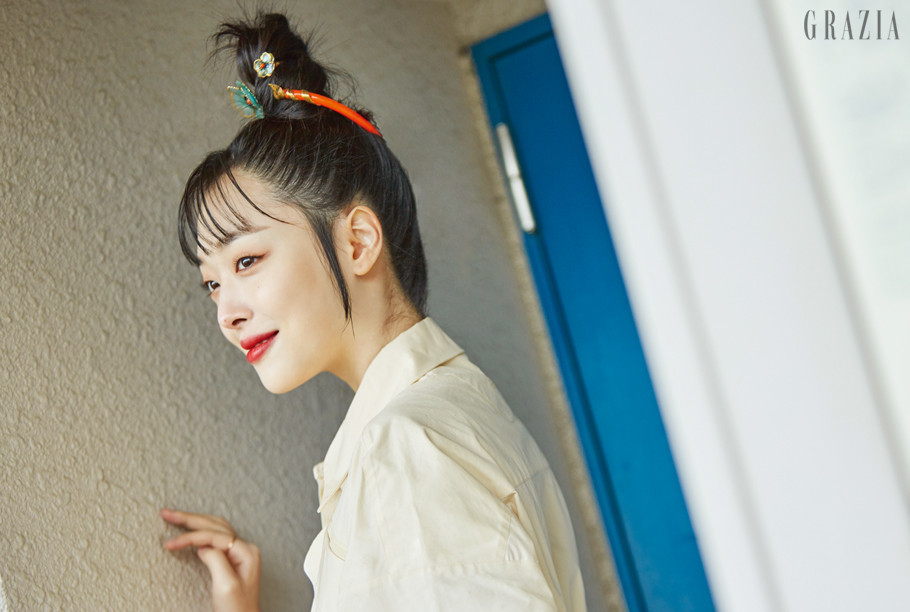 How have you been lately?

I went on vacation to Taiwan for 10 days right after wrapping up Season 1 of ‘Jinri Market’. With one friend. I wanted to break away for a bit from the busyness of daily life and go anywhere. My friend knew someone from Taiwan so we went there and it was really nice. I did nothing for 10 days: I ate breakfast, napped, I’d wake up again and eat dinner, drank wine, repeat. Thankfully, I relieved all stress and came back. Ah, I didn’t use my phone for 10 days either. It was right when I was inactive on Instagram.

Usually, how do you spend your vacation time?

If I have time, I try to stay at home as much as possible. Like barely leaving the bed to go outside. Since I’m the type of person who needs to sleep to recharge. I’m the type who thinks sleeping a lot is important.

What kind of program was ‘Jinri Market’ to you?

It’s a program that took out the me who is always home into the outside world. I’ve always kind of been afraid of meeting new people; I’m the type who is afraid of even small things. When I’m determined to do something, I’m quite bold, but if I go into a cave once, I hide so far it’s hard to call out (from inside). But, while doing ‘Jinri Market’, I had to constantly go outside as if leaving for work, I had to do things that take responsibility, since I kept having to have meetings. It felt like I was an office worker for a bit. I like having a regular life. So I felt less stressed because I was heading to work at Jinri Market, instead of having an irregular schedule. Also, this is a reality program. I was worried that I wouldn’t be able to appear honest, but those worries lessened as I went to work regularly, and later on I would do meetings as a real company employee.

Is there anything that changed after doing the program?

Finding out, ‘I’m a person who is good at something like this too’?

What do you mean by ‘something like this’? Office life?

Yes! I found out I can meet people and I can accomplish new things. I’m the type who always worries, ‘Could I do this?’. During those times, I tell myself to start things slowly, one by one, in this program too I took things step by step, I opened the door and mastered the way to go into the world.

You met lots of fans in real life when doing pop-up stores for ‘Jinri Market’. How was it?

It was really fascinating and I liked it, however, it was also burdensome. I thought fans wouldn’t come. I didn’t open pop-ups only once, and I’m also not a person who meets fans a lot. I would thing, ‘Would they really come to meet me? Would they really exist?’. Even seeing the intern and deputy friends who were with Jinri Market having huge responsibilities and thinking ‘I hope the pop ups go well’, when I sat there as the CEO…. Ah, it was so burdensome. But I’m very thankful that lots of fans came. There were even fans who came to all 3 days. There was a fan with purple hair who came even before the staff members and received some filming equipment. She waited alone for several hours, of course. When I held her hand, it was totally frozen. Because it was really cold then.

What do you think is the biggest thing you gained?

I think it’s ‘people’. The PD, my friends, the Jinri Market President, the new manager, good fans, the company representatives of the Konjac jelly, hats, clothes, film cameras, slippers, sanitary pads I sold, to the person who made the Jinri Market logo. I remember all the memories I made with those people. I remember meeting them one by one in meetings. It was a process where I truly had to squeeze out ideas, it was actually ‘real’. Even though it was burdensome and rough at times, I’m glad I met such good people.

You seemed like such a cute girl, so I was quite taken aback to see you so firm and in charge on the program. Did you change during the program, or were you initially like that?

It’s a reality program so you had to see a bit of my real personality. Initially, I had an unexpectedly serious side. But people didn’t really know that. Haha. I actually think I’m a boring person. I speak seriously, and since I’m the type who thinks for a while before talking, I talk slowly, that’s how I usually am. I hint at that side of me for the first time through this show.

After managing Jinri Market, do you feel like you could become a business woman?

I don’t think I could be a business woman. Haha. Because I like staying inside too much. But I think a regular office life as an employee would suit me.

Then, what kind of job would you like to have if you were born again?

I just draw alone from time to time. I haven’t got to draw much lately due to being busy. But I’ve been thinking about drawing a lot more than before. I’ve looked for drafts too. Honestly, I’ve drawn without thinking about it, people have been asking me about drawing ever since they found out about it. There were talks about drawing on ‘Jinri Market’ every episode, every Tuesday. So I brought my drawing diary with me everyday, but it became burdensome at some point. Since I gotta share things only I see and know about.

Do you have the chance to draw?

At first, since I liked having and playing with makeup, I’ve drawn on my face randomly with red lipstick. While doing that, I drew and it was fun. I think I got interested [in drawing] after that. And I’m not the type who knows how to spend money well. So when I have money I buy and buy drawing utensils. I had a major culture shock when I first when to an atelier. I thought about how many colors and sprays there are. Whenever I’m stressed, I admire them one by one, I touch them and apply them, and ever since I’ve started to draw naturally from time to time.

What hobby have you been stuck on lately?

I used to watch a lot of manhwa but I don’t that much lately…. I’m not sure? I don’t go to restaurants much either. At home, I put ‘instant rice’ on seaweed and eat it. Ah, lately I like meeting people and drinking rose wine. I think I found out that I can now properly enjoy alcohol without getting weird. For a while, I didn’t let myself drink and was almost always at home, but during that time I lost a lot of weight and improved my drinking habits, so it was okay.

I saw that you found bits of your 2008 diary on your Instagram. Are you the type who writes in a diary constantly?

I couldn’t write for a while, but I started again recently. While looking through older things, I thought ‘Ah, so I wrote’. When writing, even without knowing if it would be annoying, I knew it would later help me remember things clearly. During my Insta lives, when I sometimes show my fans my old diaries, they really like it. There is a bit from 2008 that said, ‘It would, at most, turn into your memory and not something you love’, which I showed as well. Hahaha. There have also been times where I filled my CyWorld passionately with bits of my diary. I dropped the story of my first love there too. If I just start by writing ‘I~’ my sincerity ends! Haha.

Whilst hearing stories from friends my age, I realized last year was the peak for business abilities. They ended in 2019. But, if I think of last year, it was filled with only good things. I especially met lots of good people and worked very busily.

Then, have you promised anything for the new year?

Don’t work hard living. It’s something I have written as a tattoo on my finger. I think you get exhausted if you try to live diligently obsessively.

This photoshoot’s concept is Sulli getting spring fever, are you the type who gets emotional with seasons?

I totally get spring fever. I’m especially lonely in the spring and want to date. Haha. So I like summer or fall. The weather is good too.

You seen like the type who always chooses hairstyles freely. From a hippie perm to a hime cut, you’ve made lots of trends. What kind of style do you want to try now?

I want to bleach my hair. I haven’t bleached my hair much. It’s difficult because it harms the hair a lot but I want to try because I haven’t. I like challenges.

Really? I don’t know how to do makeup that well so all I do is put on lipstick. Ah, I’ve been putting on Estee Lauder lipstick a lot. The shades are so natural, I feel like it suits my face even if I’m not wearing a full face of makeup.

Please tell us what you would like to take on in the new year.

I’ll definitely do a fanmeeting. I never have. I told you how happy I was to meet fans personally during ‘Jinri Market’.